Improving economic trends over the last eight years resulted in falling unemployment and accelerating economic growth. This brought unprecedented consumer confidence, which fueled stock market growth in 2017. Analysts at the beginning of 2018 began to warn that the market is overdue for a correction. In the beginning of February, US stocks plunged – only to rebound into the biggest rally in 15 months.

Volatility has returned to the market but the underlying fundamentals of the economy remain strong. That said, employment figures clearly reveal the labor market is functioning at “full employment” and wage inflation will eventually ensue. The Fed has pledged to make good on their promise to fight inflation by boosting the Fed Funds rate, at least three and possibly four times this year. Therefore, buyers hoping to take advantage of what are still historically attractive interest rates are encouraged to act sooner rather than later.

The outcome of the proposed tax reform legislation brought some uncertainty to buyers, but this did not impact the number of home sales, which were up in January by 7% from the previous year. The rate of appreciation is slowing but has not relented. January boasted three sales over $8 million in January (two off market). Golden Gate Sotheby’s International Realty represented two of the three sales. This was an unusually high number of luxury sales for what is typically the slowest month, and we are optimistic that this is a positive market indicator. January concluded with the average square foot price of $687, up 11% from the previous quarter, and the average sale price exceeding $1.5 million. 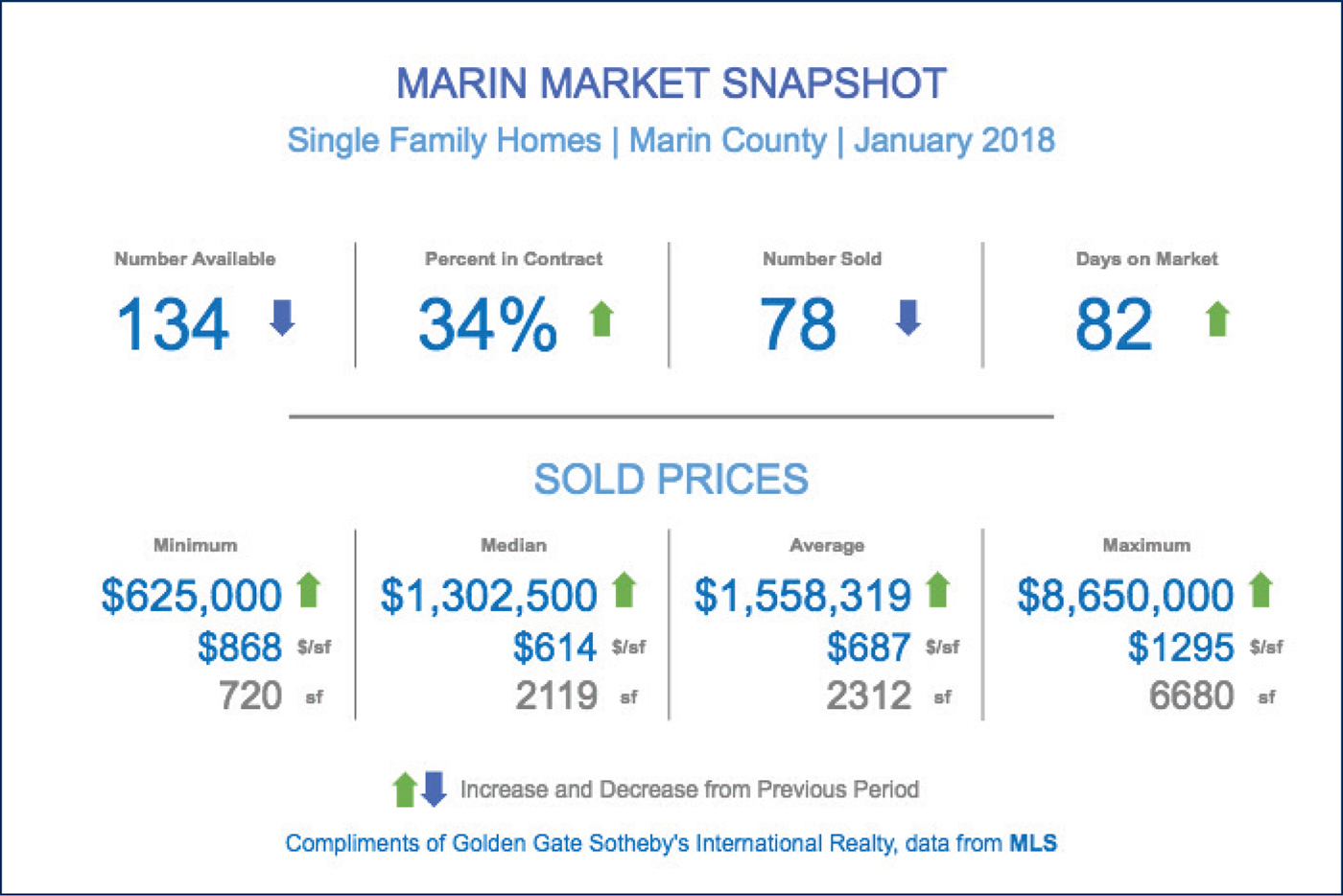 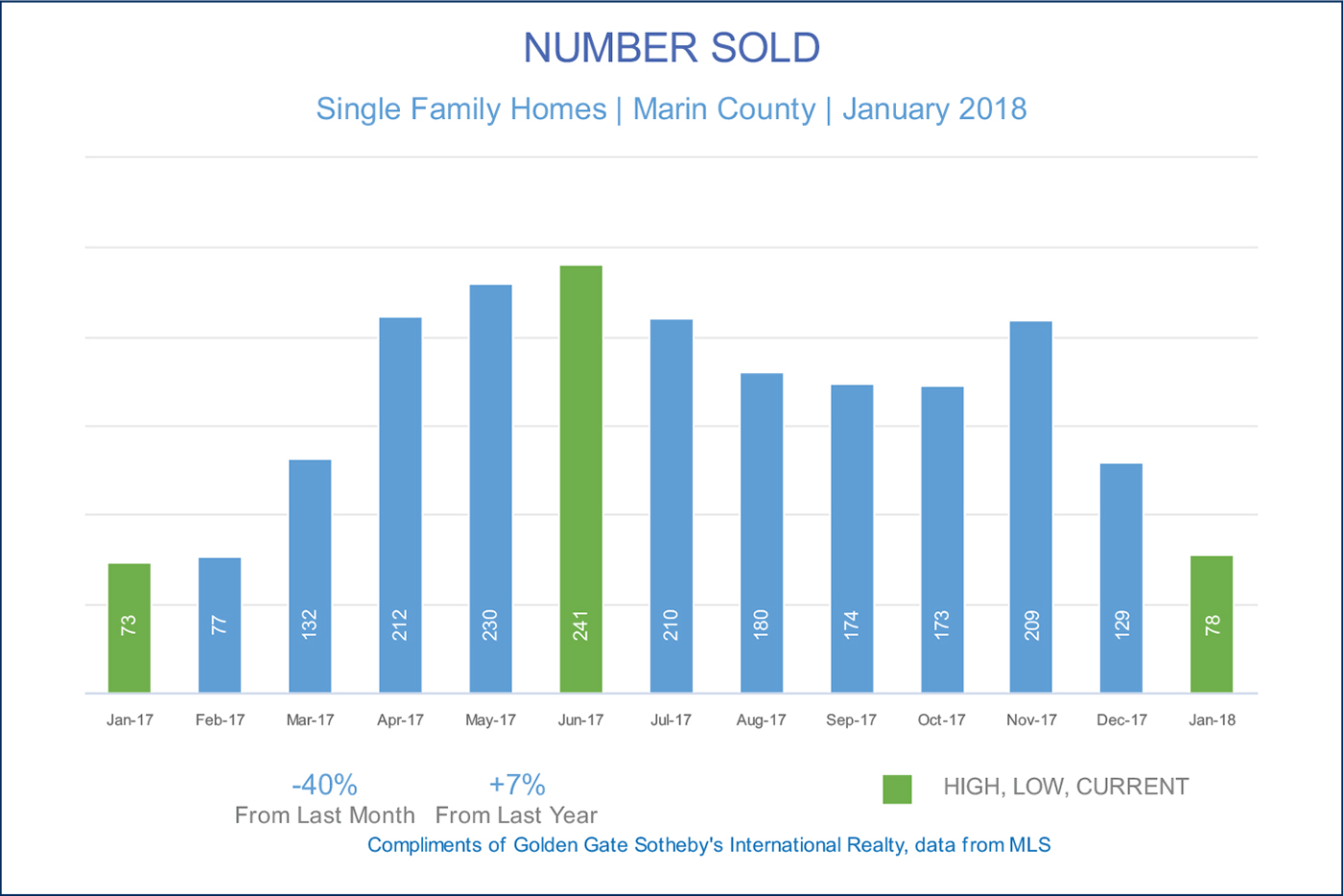 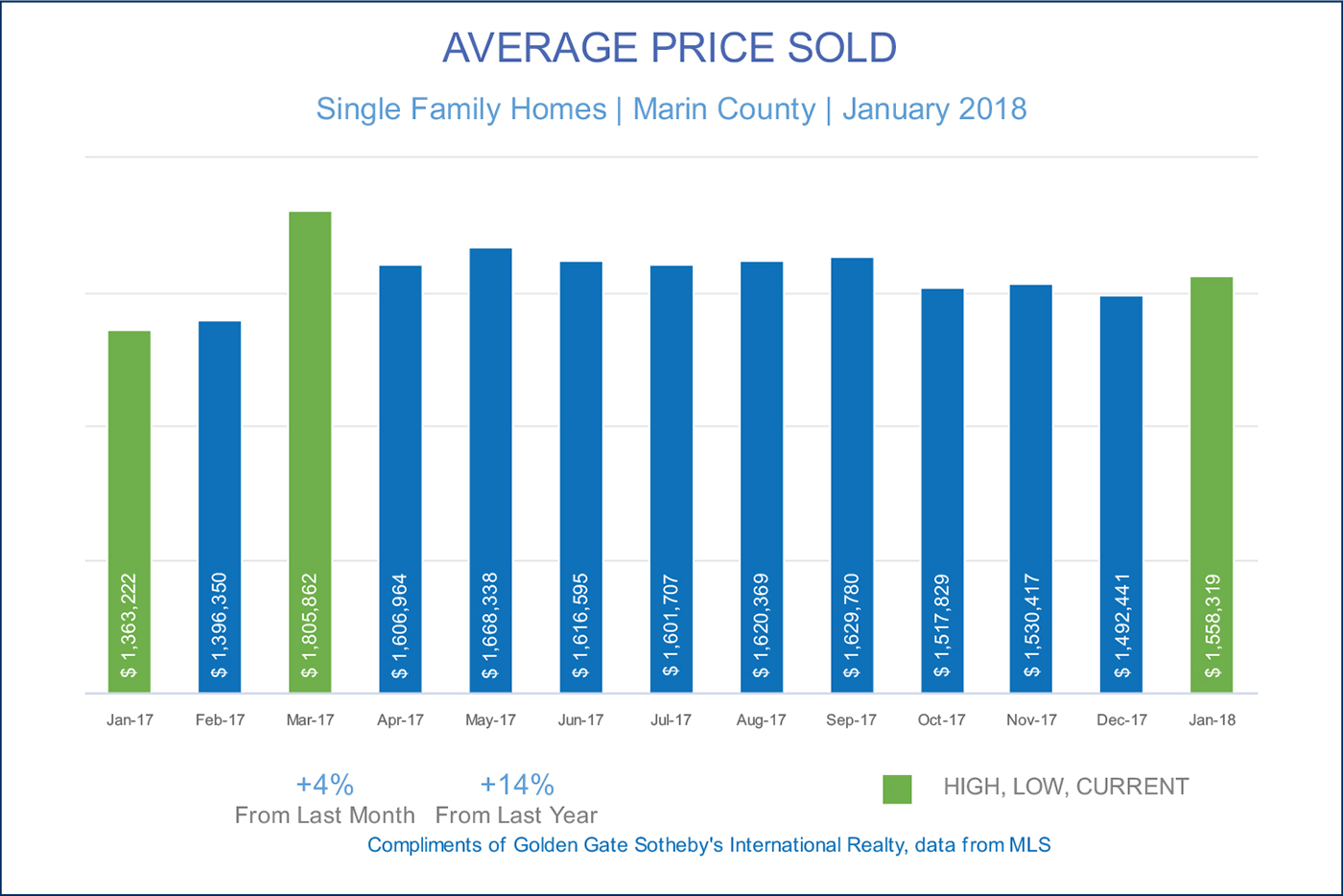 Greenbrae had the highest percentage of Homes in Contract in January (67%), followed by Kentfield (60%), Novato (53%), San Anselmo (43%) and Mill Valley (40%). Less active markets included Belvedere, Tiburon, and the Beach Cities, all under 20% of Homes in Contract, plus Corte Madera and Ross with none. 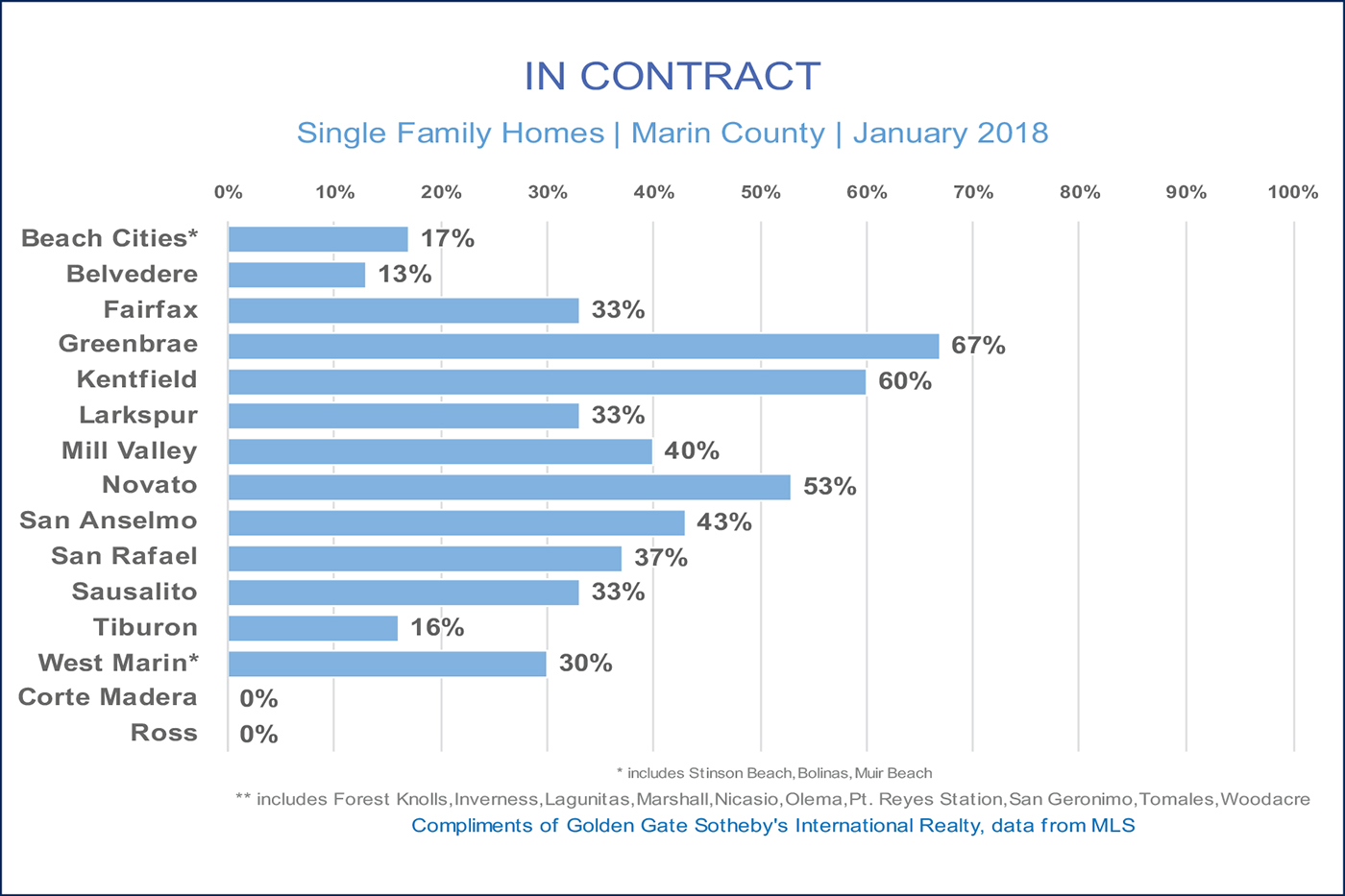 The most significant sales were all in Tiburon, although 2 of the 3 were off market and are not reflected in the statistics or tables which include only on-MLS data. The two notable off market sales closed at $7.4 million and $8.7 million, the balance of the off market sales were under $2 million. Stinson Beach had two sales over $3 million. San Geronimo had a sale close at $2.2 million. As expected, Novato and San Rafael had the highest Number of Homes Sold in Janurary at 19 and 15, respectively. 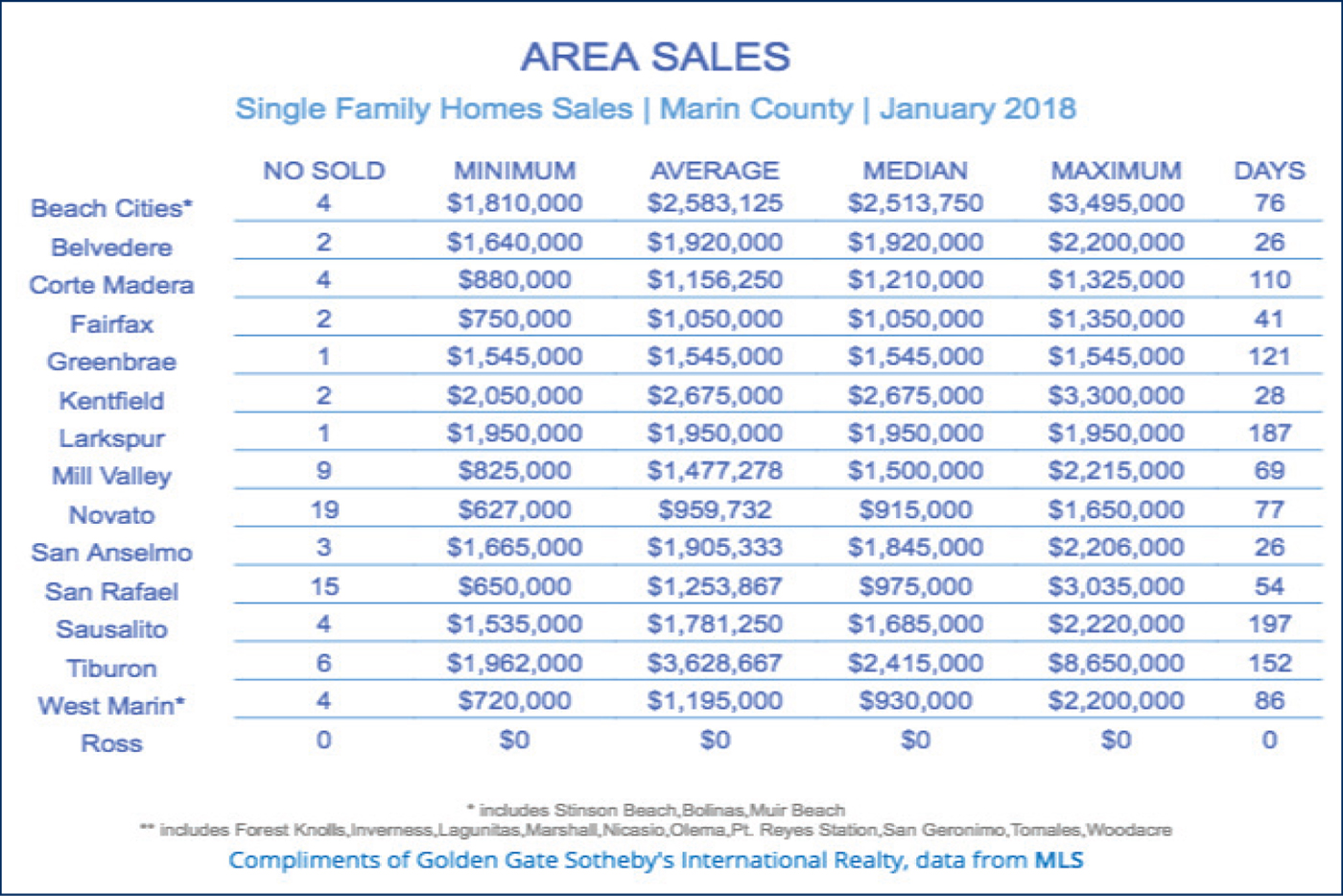 The highest number of homes sold continues to be in the $1-2 million range. The activity in the luxury market is promising; however, the $4-5 million price point is saturated and had the highest months of inventory, at 10 months. 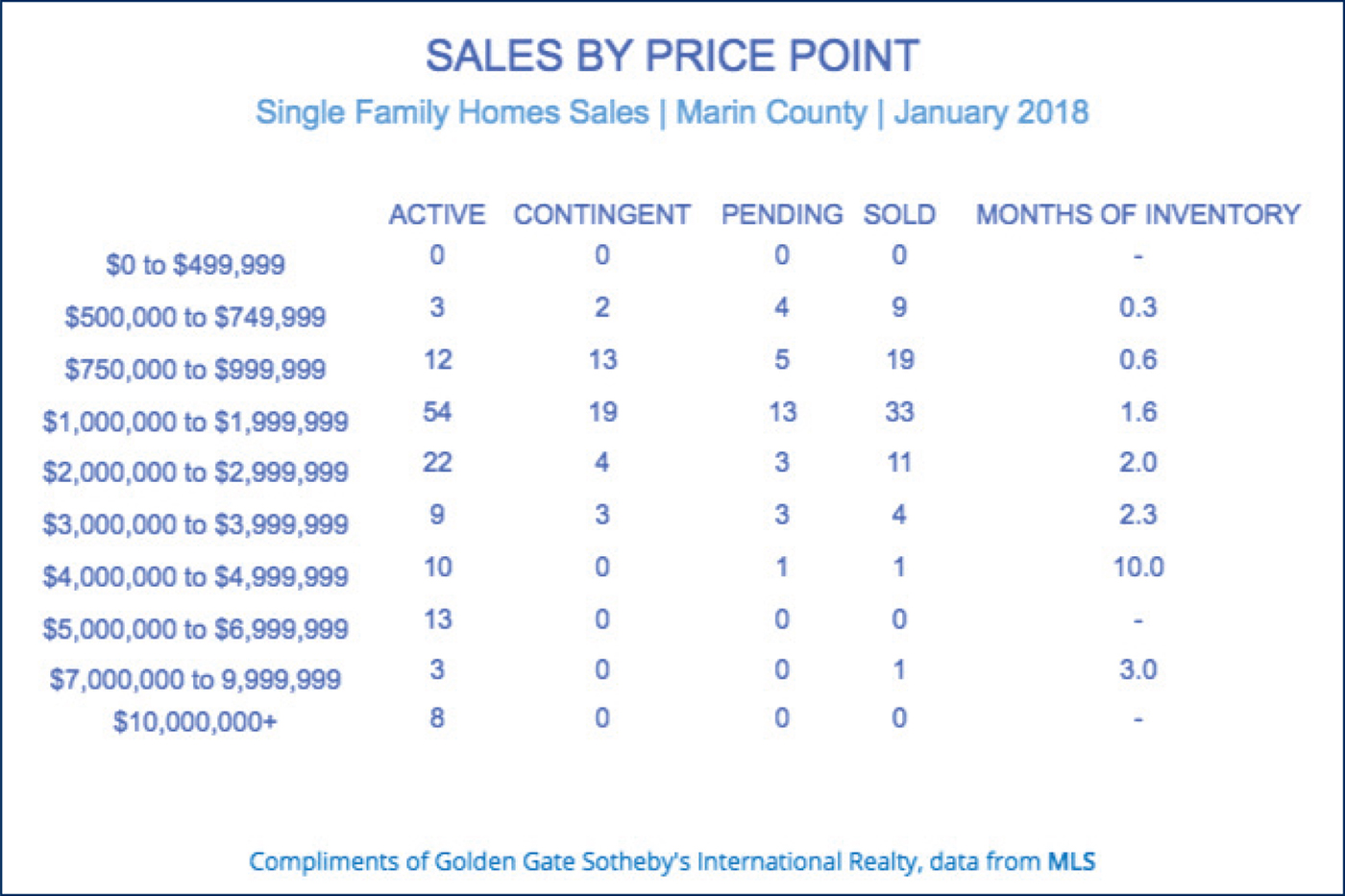