The American economy roared into overdrive last month. The Commerce Department reports that consumer spending, which accounts for more than two-thirds of U.S. economic activity, jumped for the biggest gain in five months. A likely byproduct of the unusually strong labor market which also added a robust 200,000 plus jobs. American employers have now added jobs for 92 straight months—far and away the longest streak on record and the most jobs created in 20 years. But perhaps most importantly, average hourly earnings, one of the most perplexing lagging indicators, moved up 2.7% year-over-year. A fact that feeds well into the Fed's narrative about why they must continue to regularly increase interest rates to counter inflation.

In Marin County, May's real estate market was active, with 226 homes sold during the month, an increase of 11% from April, though down slightly (2%) compared with the same month last year. The Average Sale Price also increased to $1,824,931, up 5% from April and 9% compared to May 2017, representing the highest average price point over the past 12 months. The soft luxury market had a pick-up in sales as well, with 26 homes sold above $3 million, compared with 17 in April. 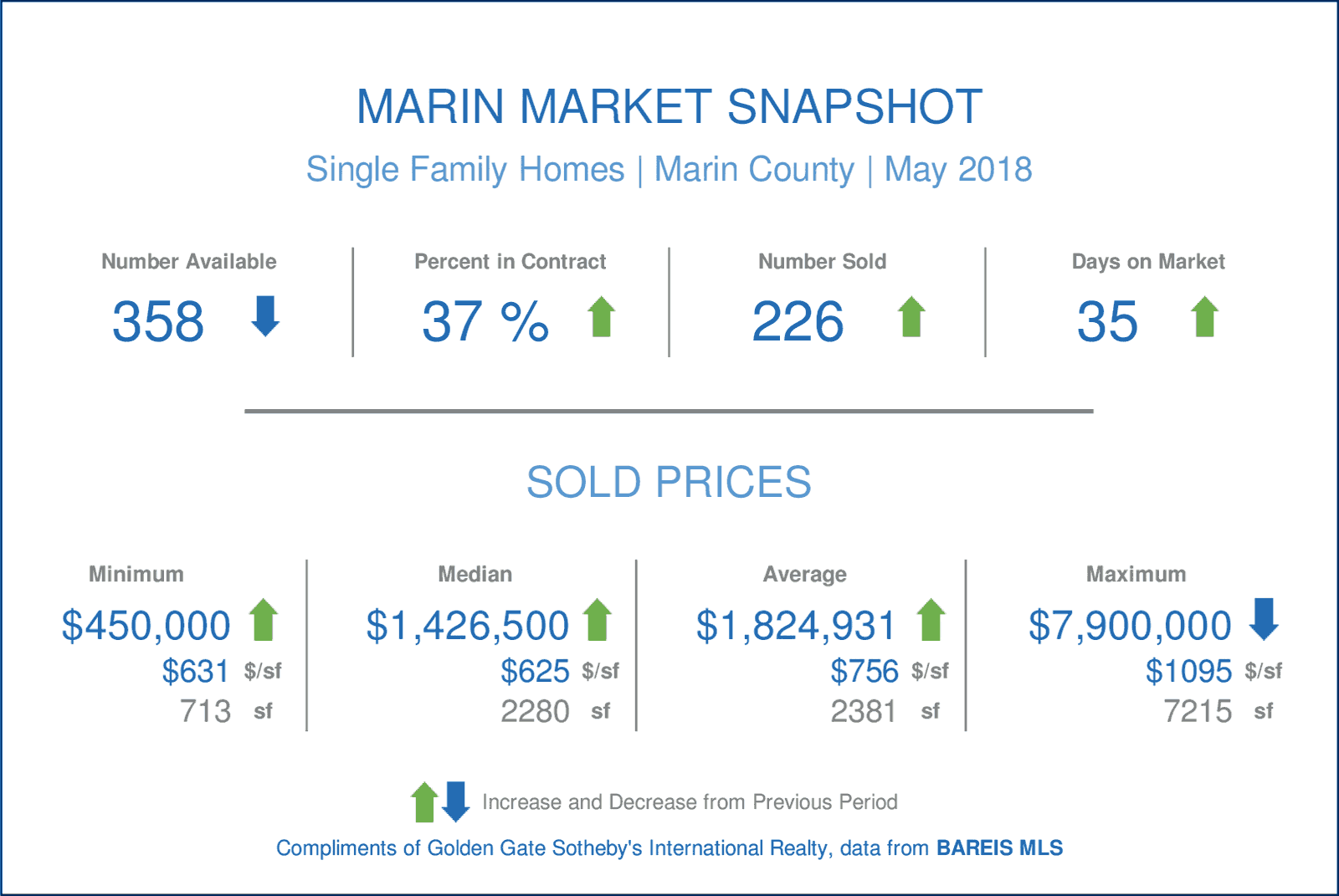 As peak listing season advanced in May, home sales were up a healthy 11% compared to April. A total of 226 homes sold in May, which was 2% less compared to the same month last year. 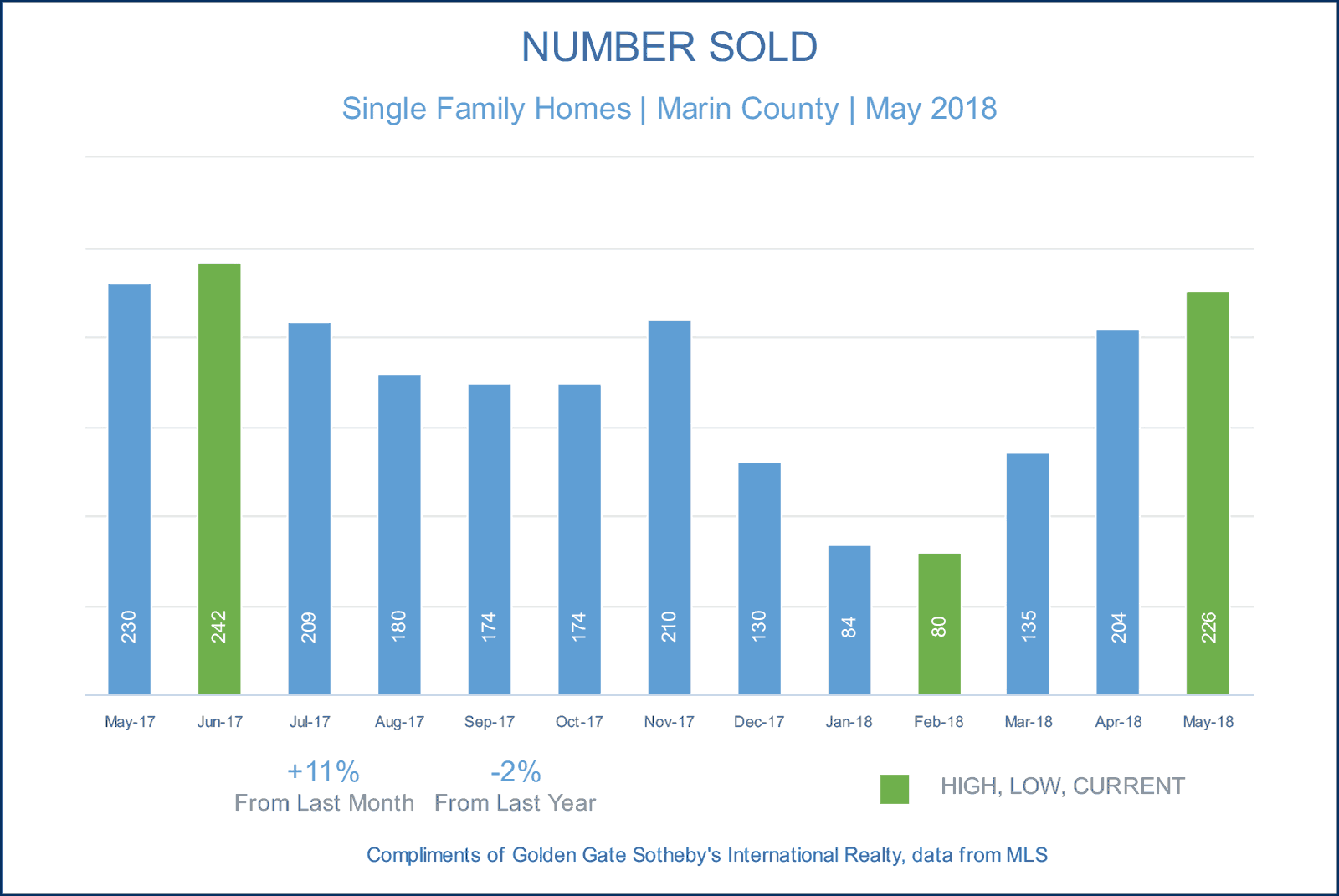 The Average Sale Price of Marin Single Family Homes was $1,824,931 in May, up 5% compared to April and up 9% compared to the same month last year. This represents the highest average price point over the last year, thanks to a notable seven homes sold between $5 and $7 million. 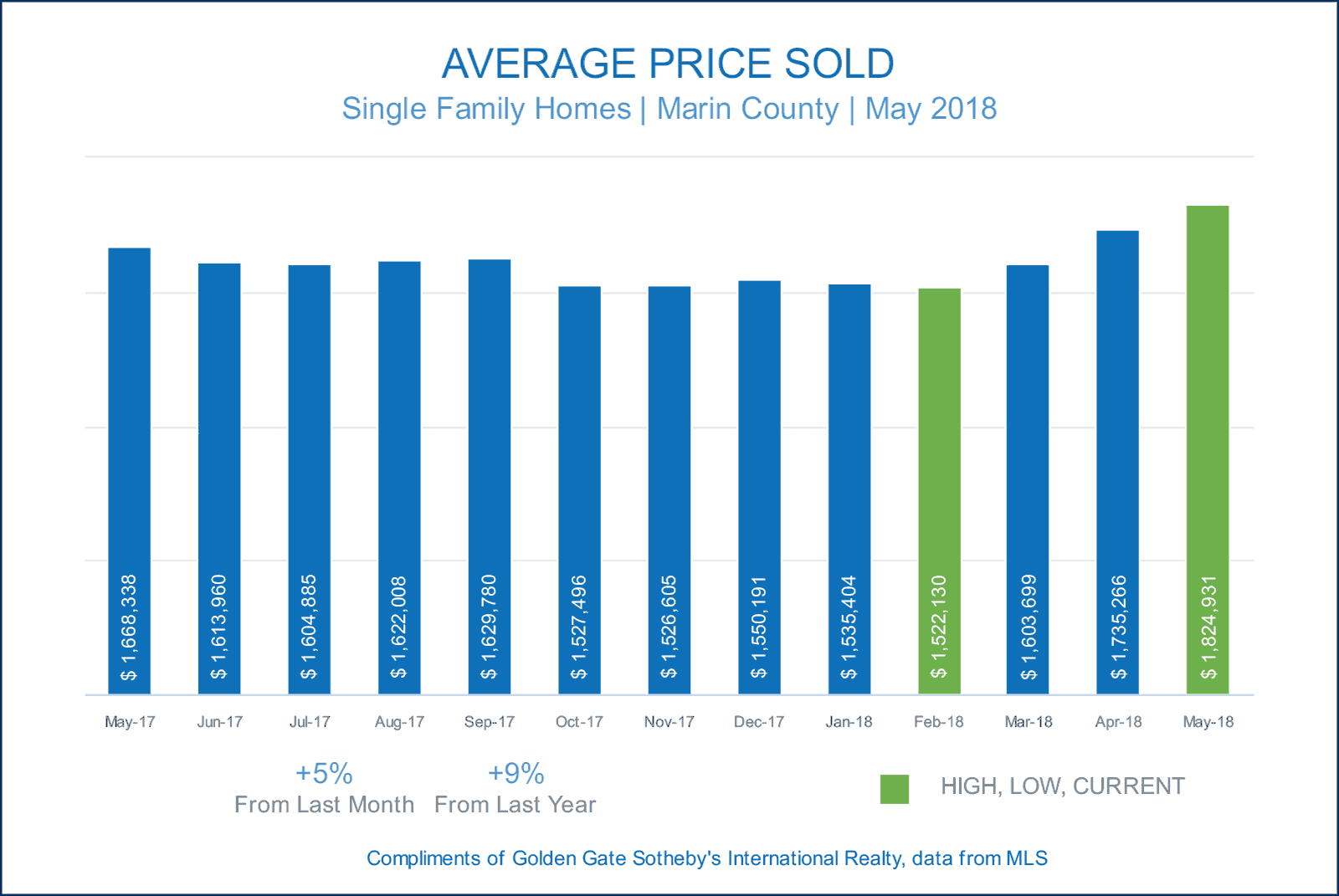 Fairfax had the highest percentage of Homes in Contract in May (65%), followed by Larkspur (60%), Mill Valley (53%) and San Rafael (40%). Less active markets included Belvedere (20%), Tiburon (19%) and the Beach Cities (12%). West Marin had a noticeable increase with 34% of Homes in Contract, indicating a seasonal pick-up in the second-home market. 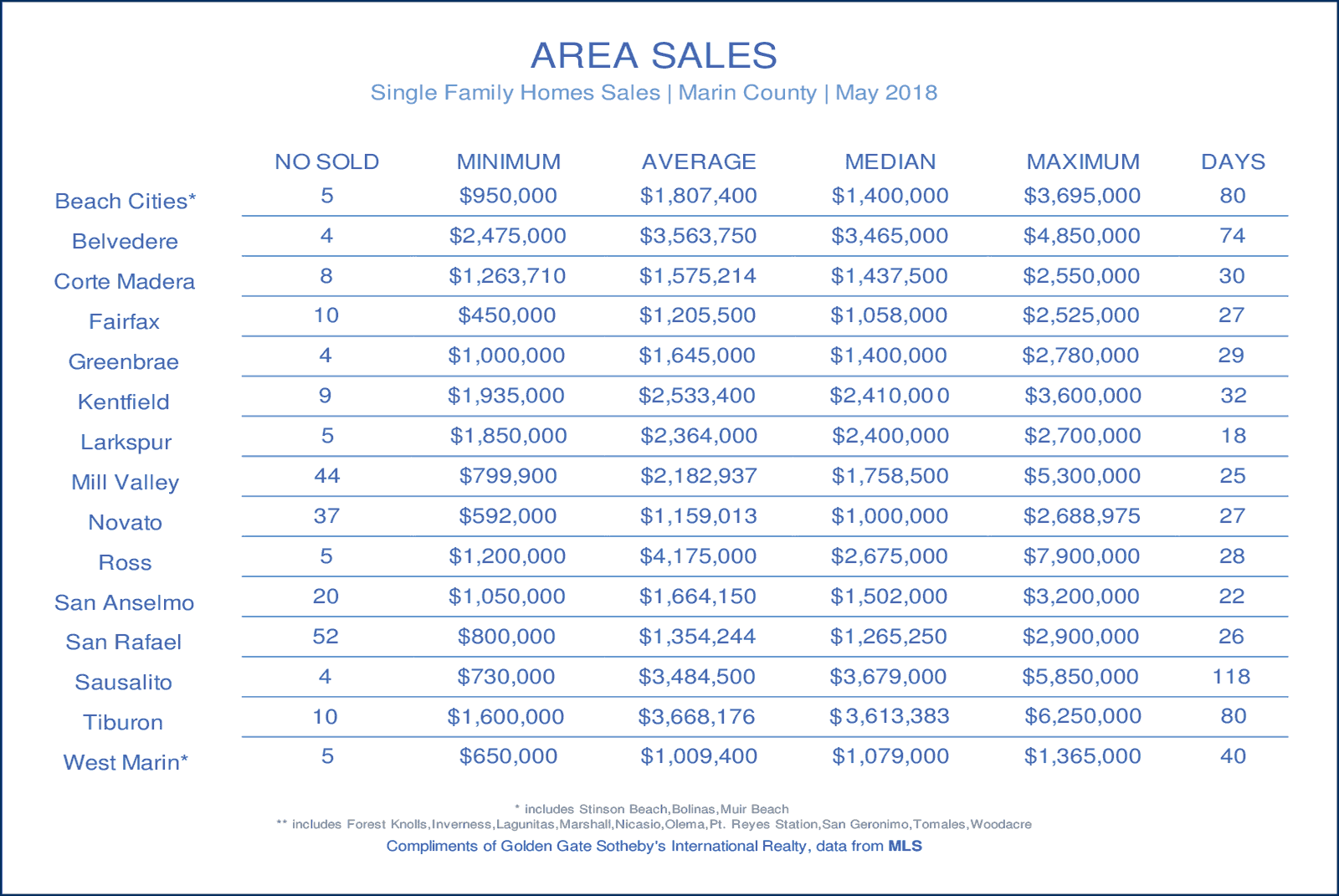 The highest number of homes sold (124) continues to be in the $1-2 million range. The activity in the luxury market picked up in May with 14 homes sold above $4 million, while a significant number of homes, 12, sold between $3-4 million. 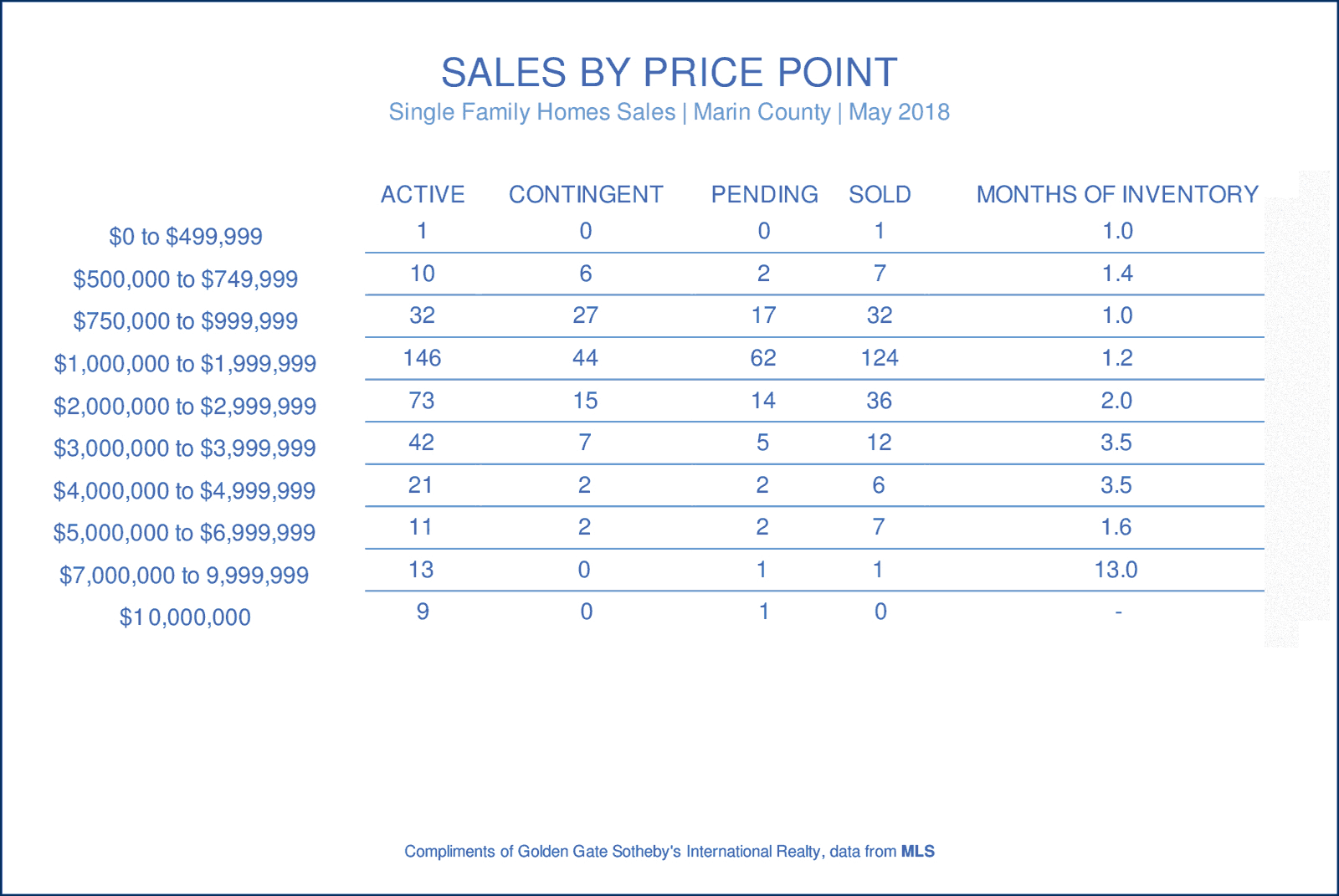