As February came to a close, the long economic recovery was at last reaching Americans’ pocketbooks; the Labor Department confirmed average hourly earnings jumped 2.9% from a year earlier and the number of Americans filing first-time claims for unemployment is now at its lowest level since 1969. Executive surveys showed historically high optimism. The ongoing stream of positive news about tax cuts, higher wages, bonuses and 401k increases had continued unabated fueling Stocks at the expense of Bonds and sending interest rates higher in anticipation the Fed will be forced to raise interest rates to counter inflation.

In the first week of March, this trend was abruptly interrupted with unexpected news of steel tariffs, and what some economists fear is the beginning of a trade war. The uncertainty has sent some shock waves through the stock market as business leaders wait to see if the announcements will be tempered with less impactful measures.

Once the markets stabilize, interest rates will likely rise. While it is only natural to view increases in interest rates though a negative lens, it’s important to remember higher interest rates are a direct result of an improving economy, and ultimately a strong economy is the leading driver of real estate sales.

The February real estate market was largely the same as the previous February, with growing seasonal inventory. Buyers appear to be actively seeking homes and there is some indication that the tax reform has emboldened buyers in the high end of the market. This is not surprising—prices are up nearly 10% from the previous year, with an average single family home price over $1.5 million. The number of sales over $2 million are up 14% from last year. 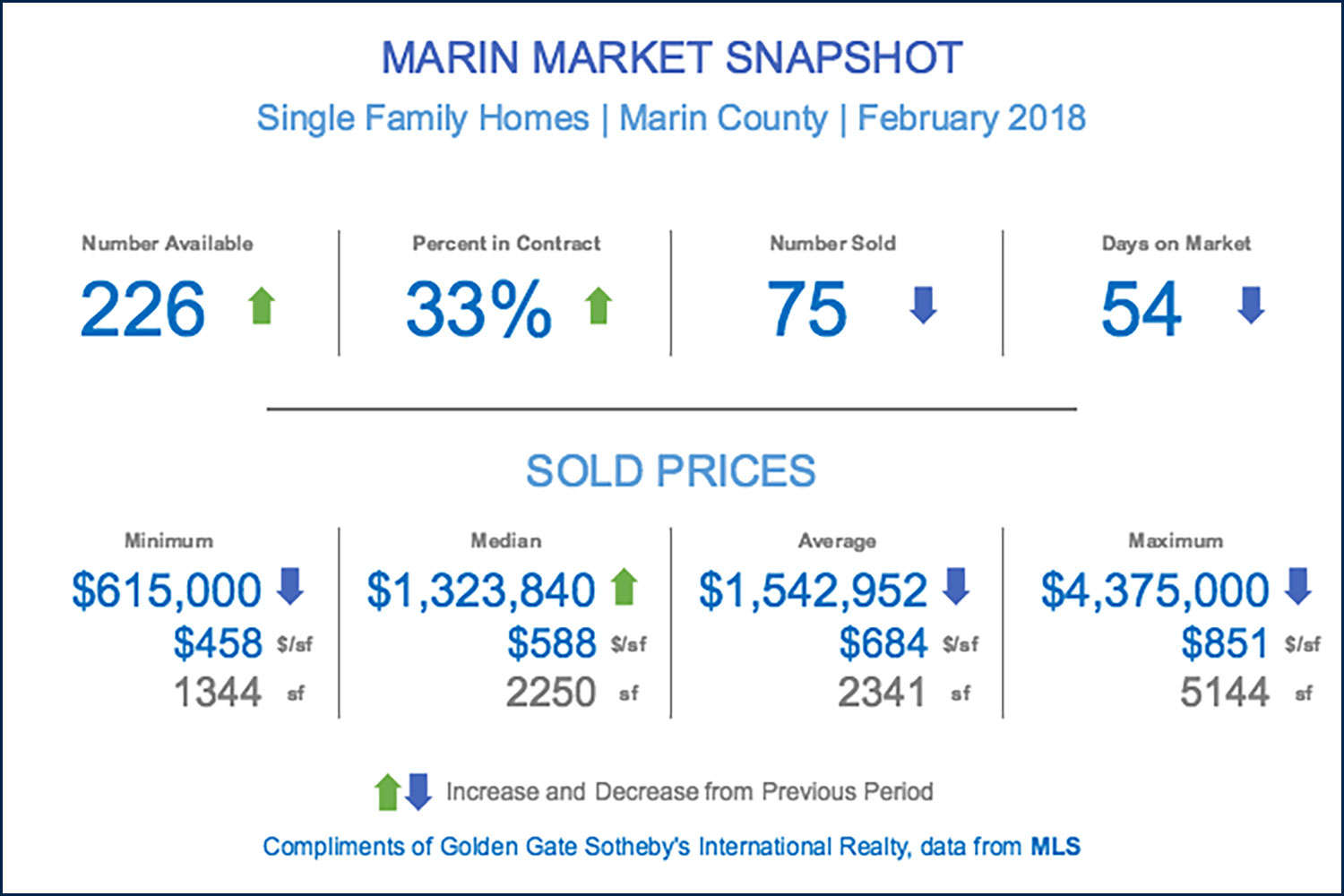 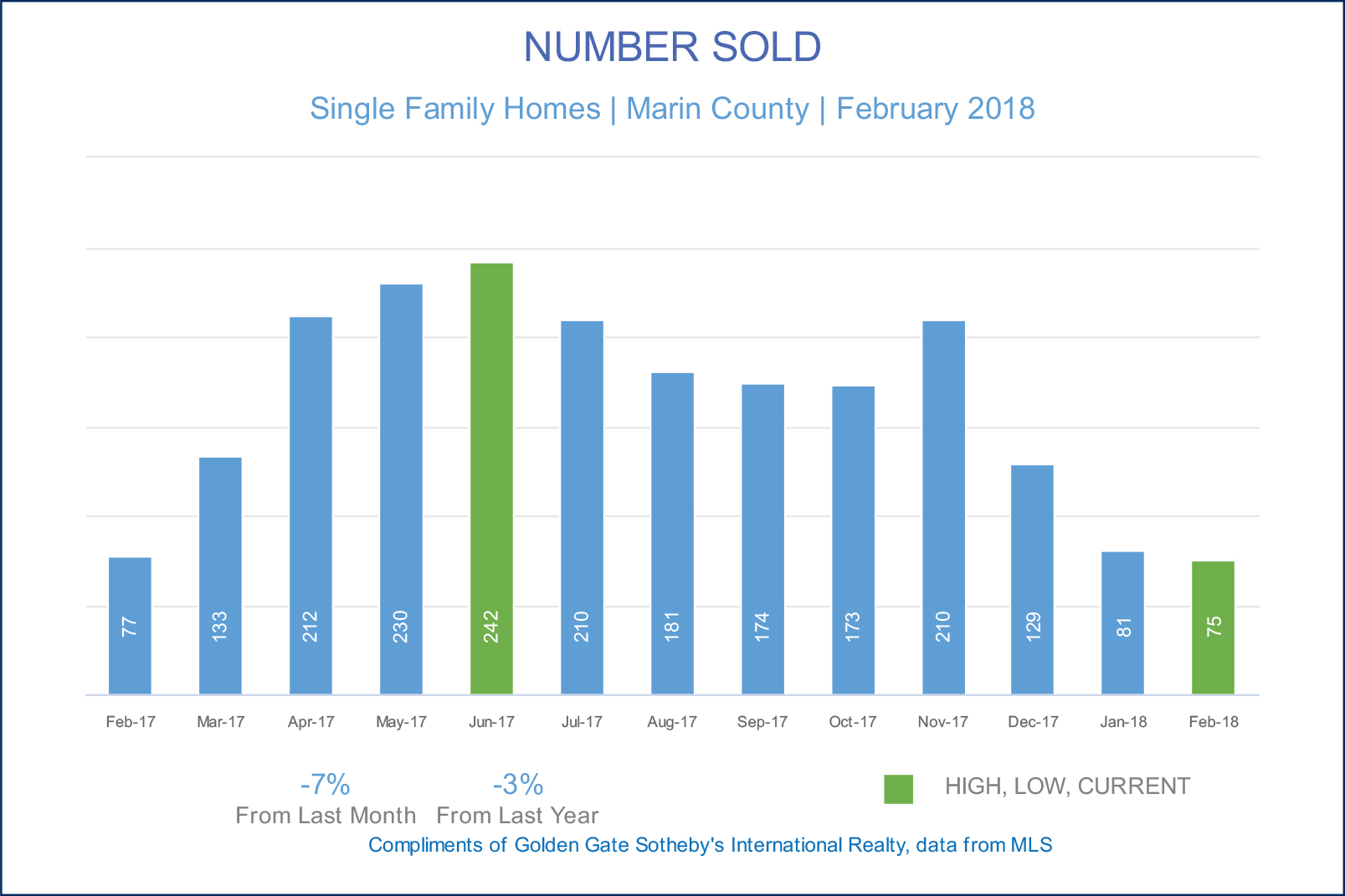 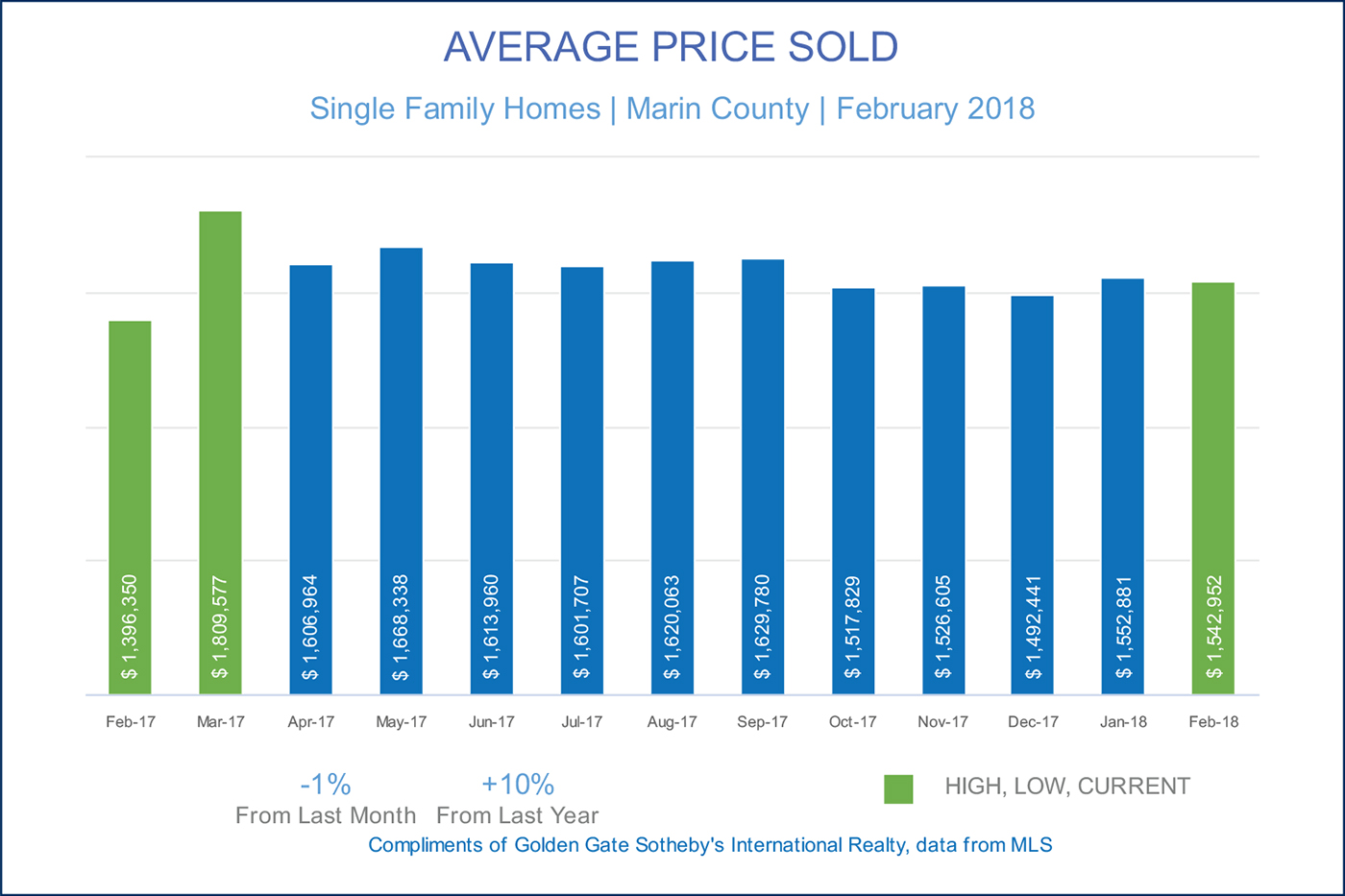 Larkspur had the highest percentage of Homes in Contract in February (71%), followed by Corte Madera (57%), Greenbrae (50%) and San Anselmo (50%). Less active markets included Belvedere and Sausalito, each with less than 10% of Homes in Contract, and Ross with none. 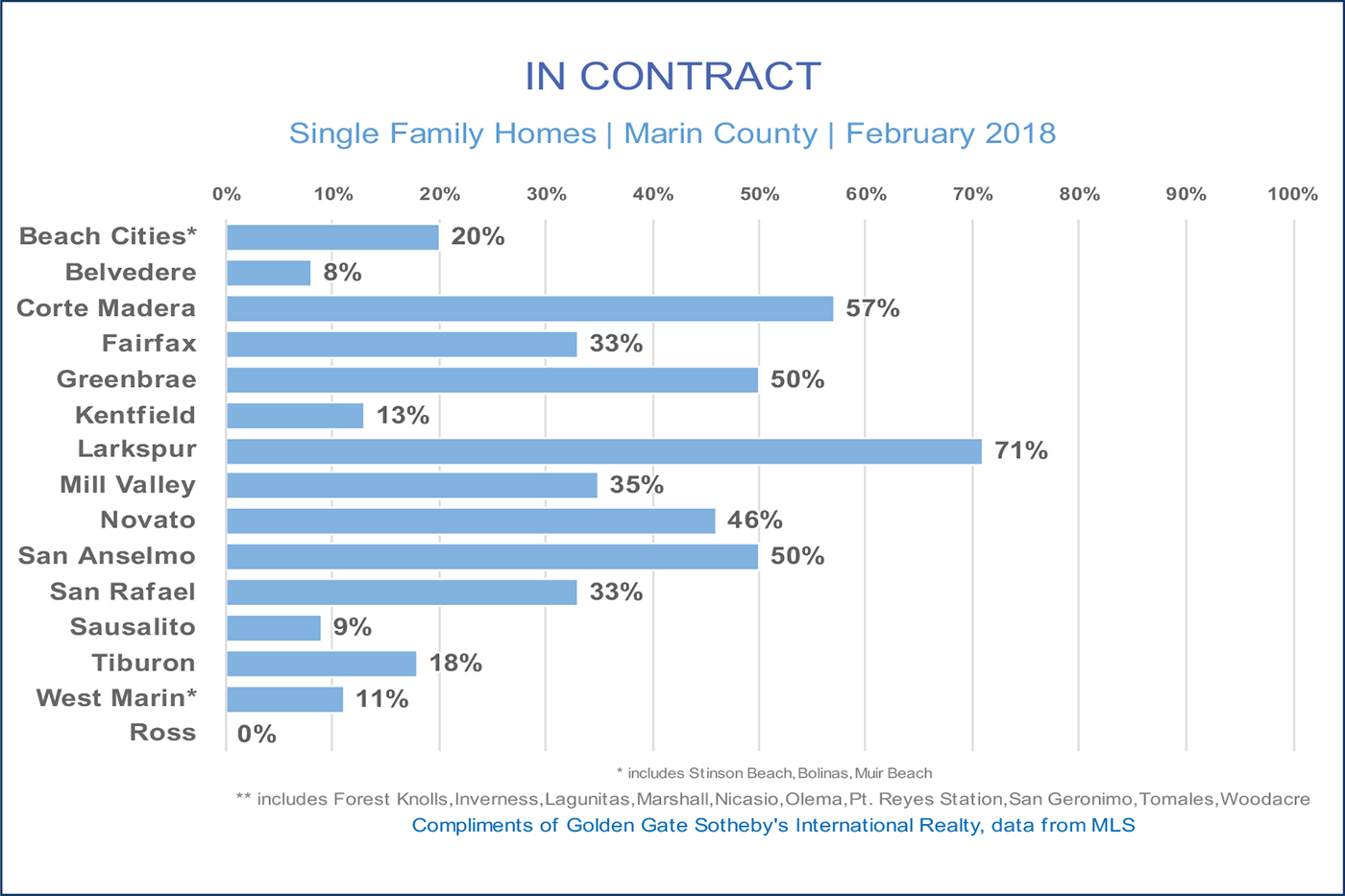 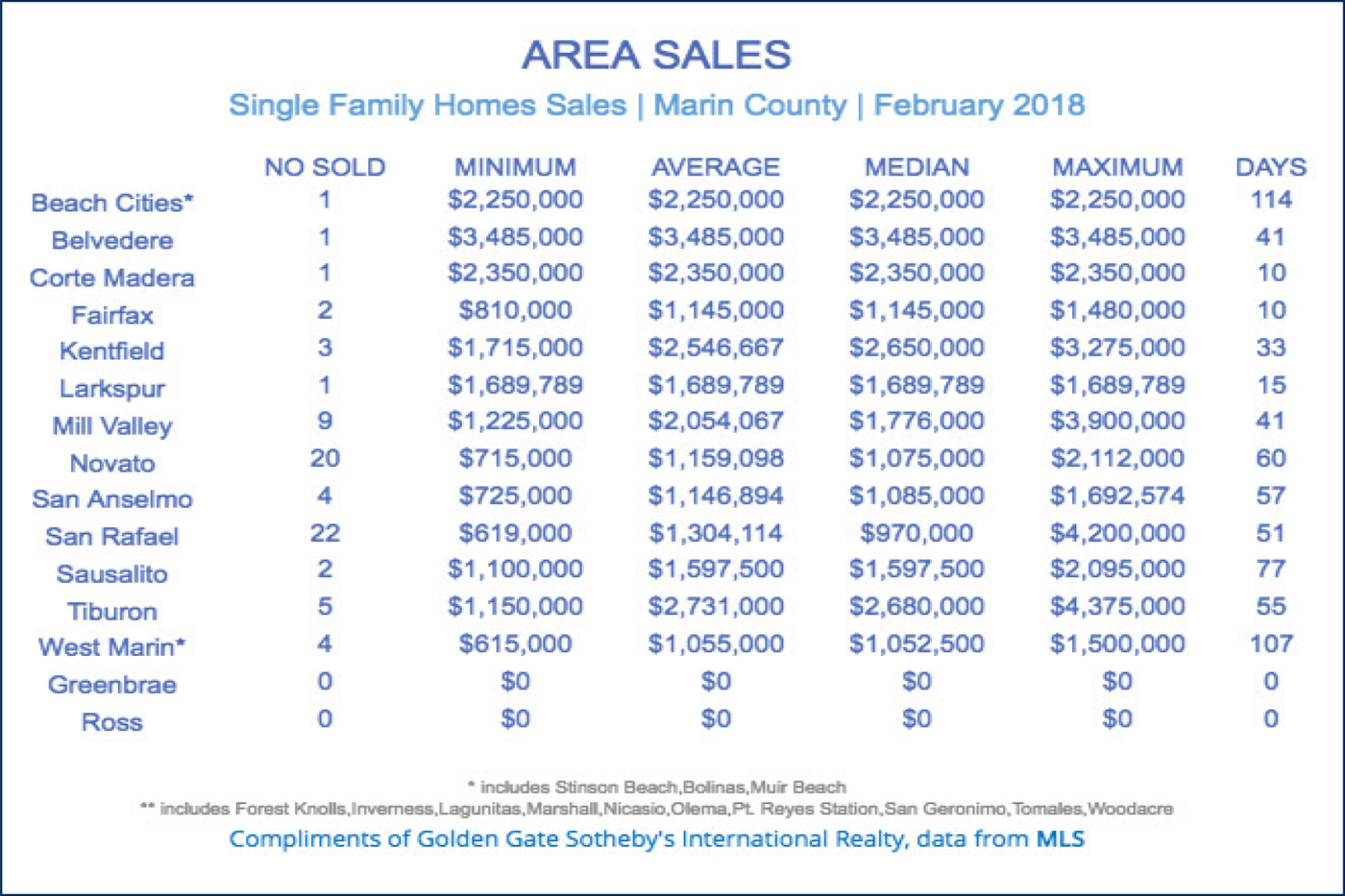 The highest number of homes sold continues to be in the $1-2 million range. The activity in the luxury market lagged in February, which is typical, with only 2 homes sold in the $4-5 million range. 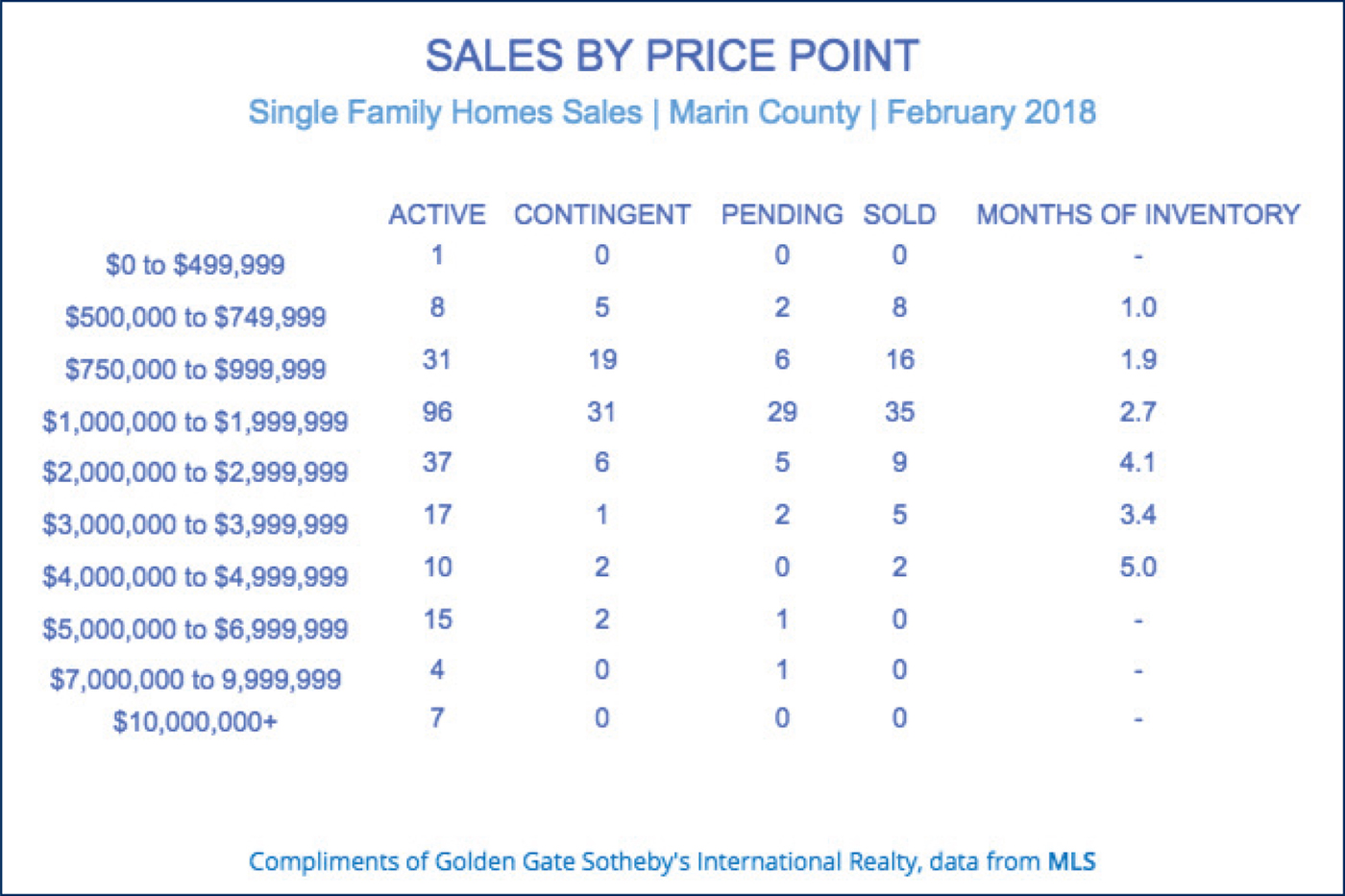 The information set forth on this site is based upon information which we consider reliable, but because it has been supplied by third parties, we cannot represent that it is accurate or complete, and it should not be relied upon as such. The offerings are subject to errors, omissions, changes including price, or withdrawal without notice. All dimensions are approximate and have not been verified by the selling party and cannot be verified by Golden Gate Sotheby's International Realty. It is recommended that you hire a professional in the business of determining dimensions, such as an appraiser, architect or civil engineer, to determine such information.